Zoom In! Learning Science with Data 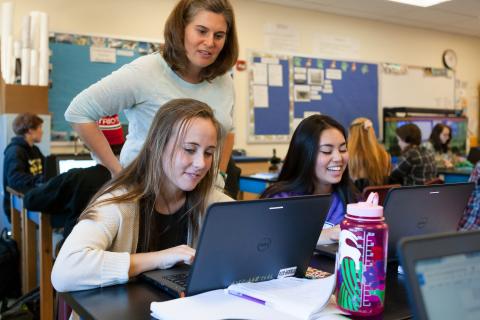 The world is increasingly data-driven. To thrive in this world, students a new level of data literacy   — the ability to solve problems and support arguments using data.

Each Zoom In blended learning module is a 3-4 day, standards-aligned science inquiry, with digital supports for students as they read and analyze data to answer a scientific question, debate their interpretations, and take notes and write a culminating argument, supported by evidence.

Climate: How is Climate Really Changing?
Using the NOAA dataset on Global & US annual temperature over 120 years, students identify long-term trends in their home state, across the US, and globally, then forecast future temperatures. Students will be asked to rebut a false claim about climate change using evidence, in a writing task. (NGSS core idea: ESS3.D Global Climate Change)

Plate Tectonics: What South American city is at greatest risk of a major earthquake?
Using the USGS dataset on Significant Earthquakes in South America, 1820-2018, students analyze historical data on earthquakes, infrastructure, and population in six countries to determine the region of highest risk. Students will write a memo to the mayor of the city they think is at greatest risk from a major earthquake, and cite evidence to support their claim. (NGSS core idea: ESS2.B Plate Tectonics and Lg-scale system interactions)

Exoplanets: Where will we find the next Earth?
Using the NASA dataset, Exoplanet Archive, Kepler Objects of interest, students analyze data to identify the three most promising “Earth-like” planets discovered by NASA’s Kepler Telescope. Students will recommend to NASA which exoplanet is the best choice for further exploration in the search for habitable worlds beyond Earth, using data as evidence to support their claim. (NGSS core idea: ESS1.B: Earth and the Solar System)

Evolution: Skyros Wall Lizards — What are the Ecological Causes for Gigantism?
using the Skyros, Greece Lizard Dataset from the Digital Data Repository Dryad, students analyze anatomical and behavioral data for Skyros Wall Lizards to determine the selective pressures that contribute size differences between island and mainland lizard populations in Skyros, Greece. Students make a claim about the extent to which predation, food availability, or both promote gigantism in the Skyros wall lizards, using data to support their claim, in a writing task. (NGSS core idea: LS4.C: Adaptation)

Trophic Cascades: What Happened When Wolves Were Reintroduced to Yellowstone?
Using rearcher-developed datasets with population counts of wolves, elks, bears, berries and aspen trees from the Digital Data Repository Dryad, students analyze data to determine how the reintroduction of wolves into Yellowstone Park affected other animals and plants in the ecosystem. Students explain how the reintroduction of wolves into Yellowstone affected the elk population, and other animals or plants in the ecosystem, citing data to support their arguments in a writing task. (NGSS core idea: LS2.C: Ecosystem Dynamics, Functioning and Resilience)